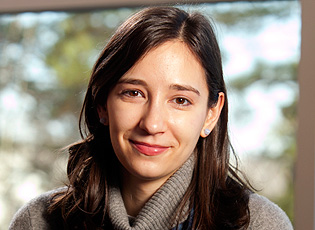 A 2007 graduate of the Yale Law School, Levy holds an M.Phil in the history and philosophy of science and medicine from the University of Cambridge and a B.A. in ethics, politics, and economics (concentration in bioethics) and in English from Yale College, where she graduated cum laudewith distinction in both majors. After serving as a clerk to Judge José A. Cabranes of the United States Court of Appeals for the Second Circuit, Levy was an associate at Jenner & Block, LLP in Washington, D.C.  She has published several scholarly articles on topics relating to judicial decision-making and court administration, including “Judging the Flood of Litigation,” 80 U. Chi. L. Rev. (forthcoming 2013) and “The Costs of Judging Judges by the Numbers,” 28 Yale L. & Pol’y Rev. 313 (2010) with Kate Stith & José A. Cabranes.

“Marin’s research interests complement and extend our faculty strengths and the work of our new Center for Judicial Studies,” said Dean David F. Levi. “Duke has a great tradition of scholarship in the fields of civil procedure and judicial administration. Professor Levy’s work on the practices of the appellate court has already generated considerable discussion within the judiciary and the appellate bar.  She also has become a mentor to many of our students and, through her work with our student scholarship series, has been particularly helpful to those who are interested in pursuing academic careers. She will be a wonderful teacher and scholar, and we feel most fortunate to have her join our faculty.”

A fundamental premise behind much of Levy’s empirical research and scholarship on judicial administration is the common assumption that most courts function the same way.  It’s incorrect, she says, and differences among courts’ systems and procedures can affect judicial decision-making and even legal outcomes.  In “The Mechanics of Federal Appeals: Uniformity and Case Management in The Circuit Courts,” 61 Duke LawJournal 315-391 (2011), she reviewed the case management practices and their outcomes in five federal appellate circuit courts, suggesting that “current practices can and should be improved through increased transparency and information sharing between the circuits.”  She is now examining practices surrounding the composition and subsequent outcomes of judicial panels for oral arguments.

“There has been a sort of default assumption that these panels are randomly created, so when you argue a case in front of three judges, they’ve been more or less randomly assigned,” she says. “What actually goes on is a lot more complicated — and it’s not random. Either the clerk’s office or the chief judge puts the panels together, with different courts factoring in different considerations. For example, some courts limit the number of times that the same three judges sit together. Those courts want to make sure they are getting a variety of different panels so as to avoid an entrenchment of a particular set of views.  Other courts don’t share the same priority and in those courts you see a greater repetition of panels.”

Levy first became interested in the inner workings of the judiciary as a law student at Yale when she researched the area for Professor Judith Resnik; her interest deepened during her clerkship with Judge Cabranes.

“Clerking is just a fabulous learning experience about how the courts really function, day-to-day,” she says. “One thing that struck me was the number of cases that never go to oral argument. I realized there was a stack of cases we never dealt with and I wondered, ‘Why is that, and what are those cases?’ That brought up more questions.

“Also, I started to appreciate that court practices differed.  The Second Circuit had different practices from other courts, but it was also clear that most judges were not intimately familiar with how other courts operated.  They were simply trying to keep their own courts running.  That triggered my interest.”

Levy’s interest in how courts respond to pressure has moved from case management to substantive law.  Her forthcoming paper in the Chicago Law Review focuses on the Supreme Court’s use of “floodgate arguments.”

“From time to time you see the court saying, ‘We’re conscious of the fact that if we go with x decision, that will open the floodgates of litigation.’ It’s a fairly commonplace argument, but when you start thinking about it, you wonder, ‘Wait a minute, why should that affect the substantive outcome? At what point do we get to worry about how many people will come through the courthouse door? Is that really a valid consideration?’ I’m looking at how the Supreme Court has used these arguments, and who benefits. I’m asking when, and whether, this is appropriate.”

Levy, whose parents and grandparents are academics, admits that her tenure-track position at Duke is her dream job.  It is work, Levy says, that she has been drawn to for most of her life.

“From a young age, my hope was to be a law school professor someday,” she says. “I’ve consistently thought the law was fascinating. It felt to me like it encompassed the biggest issues we grapple with — how we govern ourselves and what mechanisms we use to resolve our disputes.”

Levy is equally enthusiastic about the classes she teaches, which include Civil Procedure. “The procedural courses [address] the second-order questions of, ‘When things go wrong, how are we going to figure out how we get together on this,’” she says.   “I think some people see it as dry material, but I love it.”

Grayson Lambert ’12, who worked as Levy’s research assistant, says he enjoyed her propensity for “delving into unexplored areas of law.”

“But what makes Professor Levy such an incredible addition to the faculty is that in addition to this intellectual rigor, she enjoys students.  She takes a genuine interest in them that shows that she really cares about their opinions, interests, and aspirations.  As a teacher and a mentor, she will be a student favorite for years to come.”