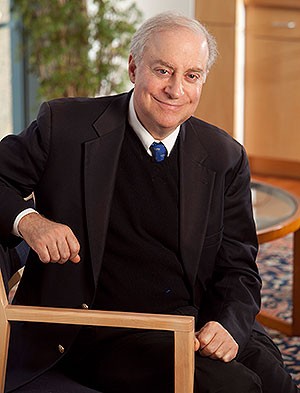 Dean David F. Levi has been elected president of the American Law Institute (ALI), effective May 24, 2017. The president is a volunteer officer who chairs the Executive Committee of the ALI Council and sets the direction for the organization.

The American Law Institute is the leading independent organization in the United States producing scholarly work to clarify, modernize, and improve the law. The ALI drafts, discusses, revises, and publishes Restatements of the Law, Model Codes, and Principles of Law that are enormously influential in the courts and legislatures, as well as in legal scholarship and education. The membership includes 22 Duke Law faculty and one Sanford School of Public Policy faculty.

Levi will immediately begin serving as ALI president designate, working closely with ALI President Roberta Cooper Ramo through the transition. Ramo will step down in 2017 after completing her third three-year term in this role.

“I am delighted to have David as my successor,” said Ramo. “He is a brilliant legal mind and a proven leader who has great passion for the mission of The American Law Institute.  It has been my great fortune to serve as ALI’s president, and I look forward to transitioning the role to David over the next year.”

The president is nominated by ALI’s Nominating Committee, currently led by Diane P. Wood, chief judge of the U.S. Court of Appeals for the Seventh Circuit, and elected by its Council.  “We are thrilled to have someone with David’s reputation in the legal community as our next president,” said Chief Judge Wood. “I have had the pleasure of working closely with him, both in his role as an invaluable member of our Council for 10 years and within the federal judiciary. His extraordinary legal background and unwavering commitment to the law will bring keen insight and direction to the American Law Institute.”

“I have known David for years and am excited to have the opportunity to work with him as ALI’s next president,” added Richard L. Revesz, ALI’s director and dean emeritus of New York University School of Law. “The American Law Institute will benefit greatly from David’s academic and judicial experience. He brings great wisdom, sound judgment, and a record of enormously distinguished accomplishment. David has dedicated his life to serving the law, and I know that he will serve the institute admirably.”

“I am truly honored that my esteemed Council colleagues have elected me to this position,” Levi said.  “It has been my privilege to have the opportunity to serve ALI and its mission of clarifying and modernizing the law. I have known Ricky as a fellow dean and it will be a pleasure to work closely with him at ALI, as I continue the path that Roberta has set out for me, leading ALI into its 100th year as the premiere independent law reform organization in the United States.”

In addition to his role on the Institute’s Council, Levi was an adviser to ALI’s Federal Judicial Code Revision and Aggregate Litigation projects. He currently is a member of the Projects Committee and serves as adviser on the Project on Sexual and Gender-Based Misconduct on Campus: Procedural Frameworks and Analysis.

In 1994, he was appointed by Chief Justice William Rehnquist to the Advisory Committee on the Federal Rules of Civil Procedure and became Chair of this committee in 2000.  In October 2003, he was appointed Chair of the Standing Committee on the Rules of Practice and Procedure, which sits at the top of the federal judiciary’s rulemaking process, and in 2010 he was reappointed by Chief Justice John Roberts to serve as a member of that committee. He was chair of the Ninth Circuit Task Force on Race, Religious and Ethnic Fairness and was an author of the report of the Task Force, and from 2003 to 2005, he served as the president of the Ninth Circuit District Judges Association.

In 2014, Levi was appointed chair of the American Bar Association’s Standing Committee on the American Judicial System, and in 2015, he was named co-chair of the North Carolina Commission on the Administration of Law and Justice, two roles in which he still serves.