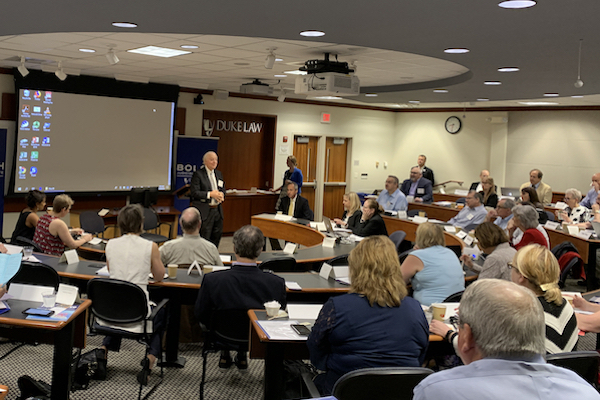 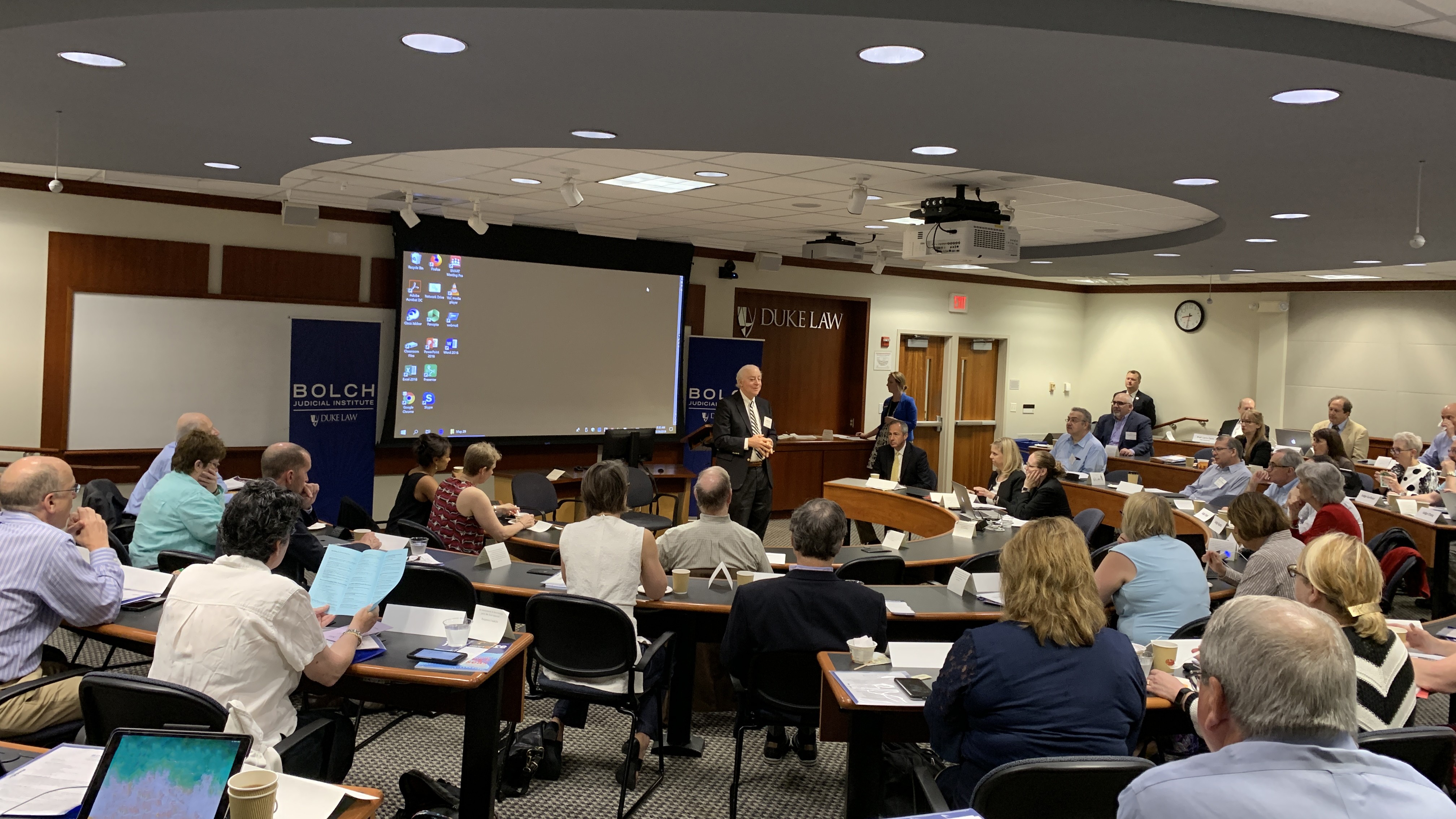 Nearly 50 federal judges from across the country attended a survey course geared toward helping judges understand and anticipate the ways in which cutting-edge technologies are currently affecting — and likely to affect — the legal world. The program, “Law and Technology for Judges,” was co-hosted by the Bolch Judicial Institute and the Federal Judicial Center at Duke Law School in May. Over a span of three days, the judges participated in lectures on artificial intelligence, cyber security, data privacy, technology and criminal justice issues, fintech, and blockchain, and examined the impact these topics and related technologies will have on the judiciary.

In developing the seminar, Professor David F. Levi, director of the Bolch Judicial Institute and a former United States District Judge, said that he hoped to design a program that he would have found useful as a judge. He said he has seen a dramatic increase in judges’ interest in emerging technologies and the challenges these technologies pose to different areas of the substantive law and the operation of the courts. This program was created to try to bring the very best expertise, research, and insight from the academic and business worlds to the judiciary.

“When we opened it up for enrollment, we wondered if we were right about this perception — and we were right,” Levi said. “A hundred judges signed up almost immediately but we could accommodate fewer than half of them. It is my hope that we’ll be able to offer this course year after year, as long as there is still demand.” 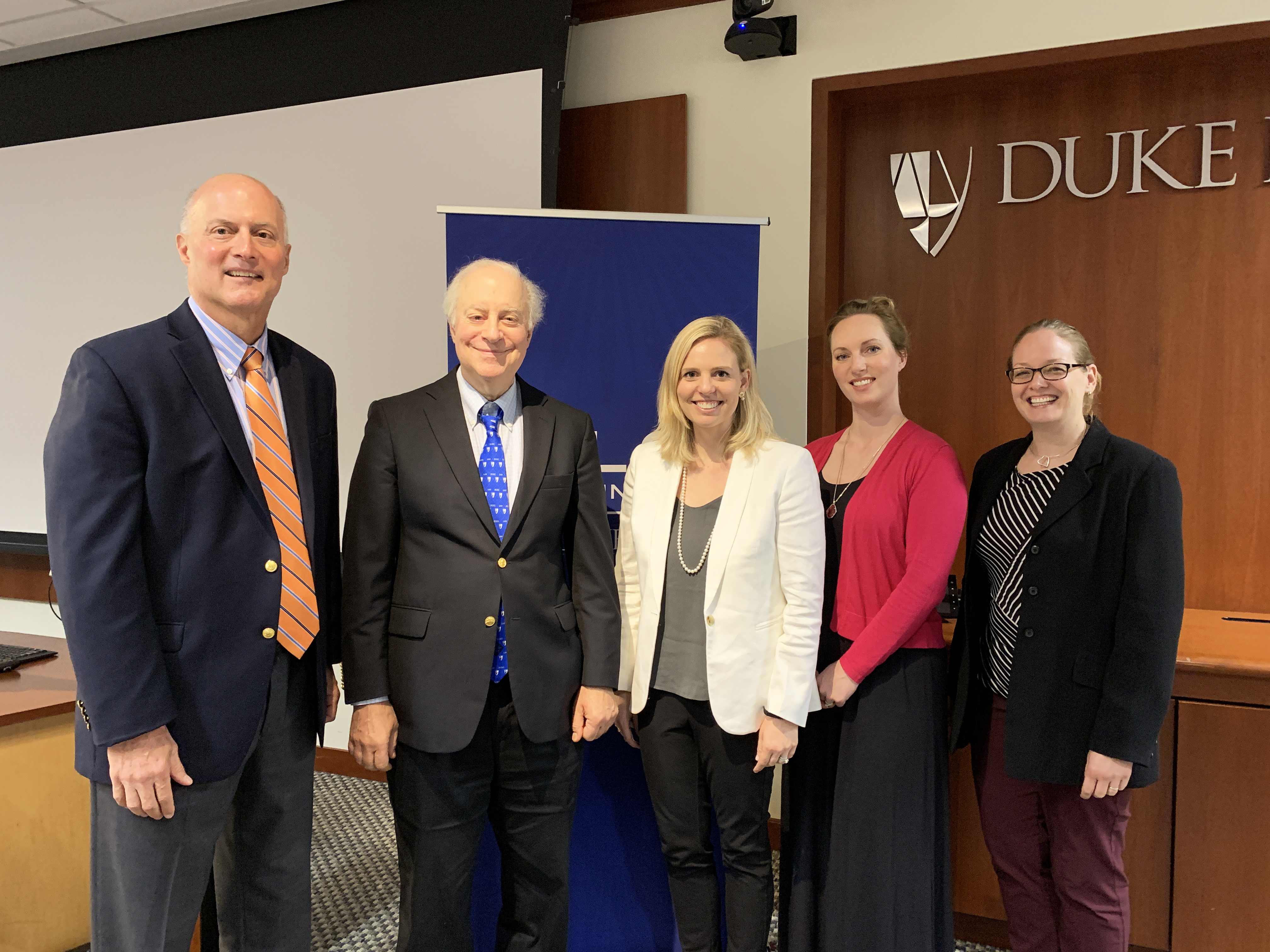 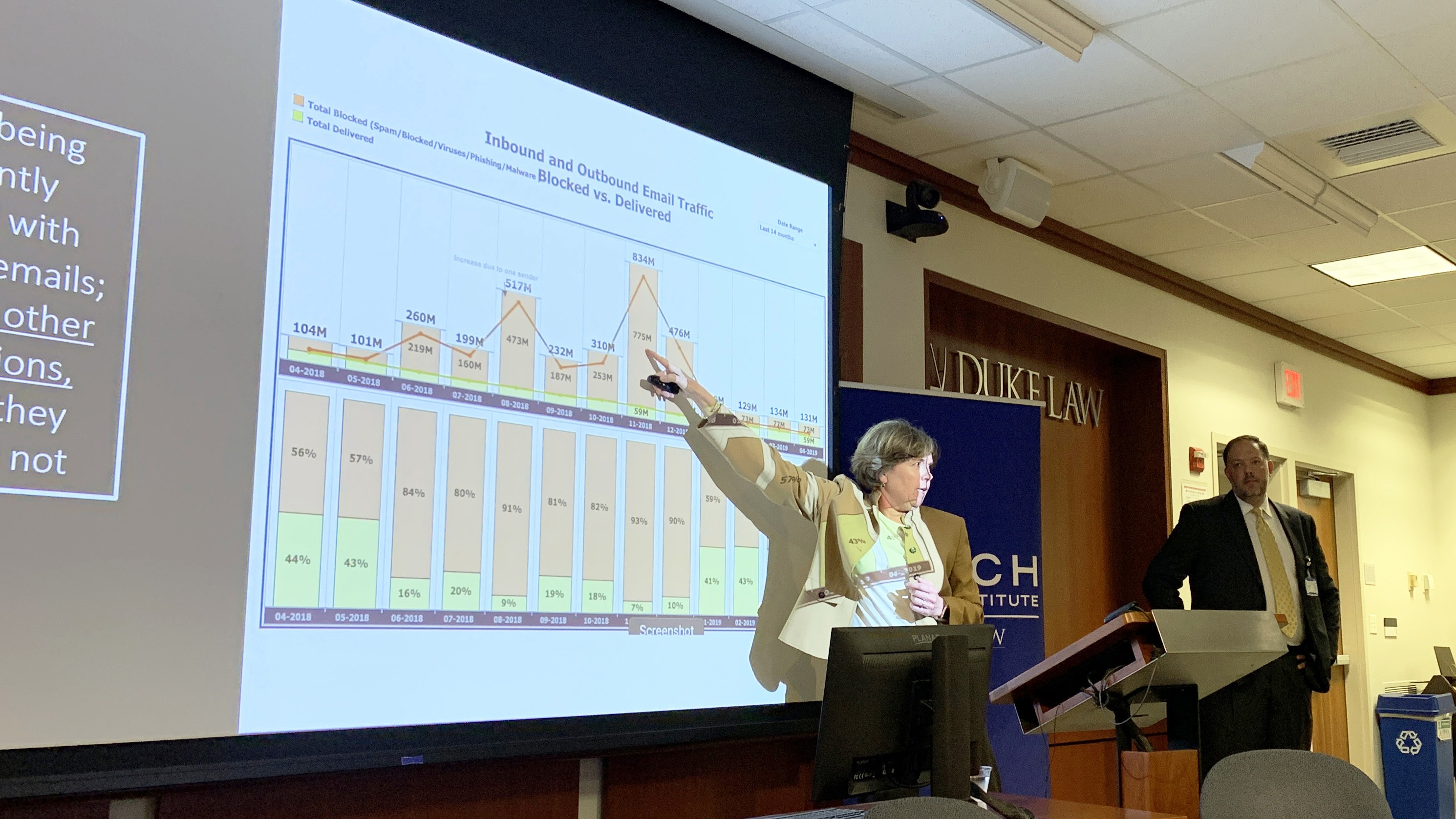 Levi said he was pleased at the evident eagerness to participate shown by Duke University faculty from all across the campus. He described the event as a “meeting of the minds,” where judges could actively engage with the issues through professionals who are actively developing these new technologies. 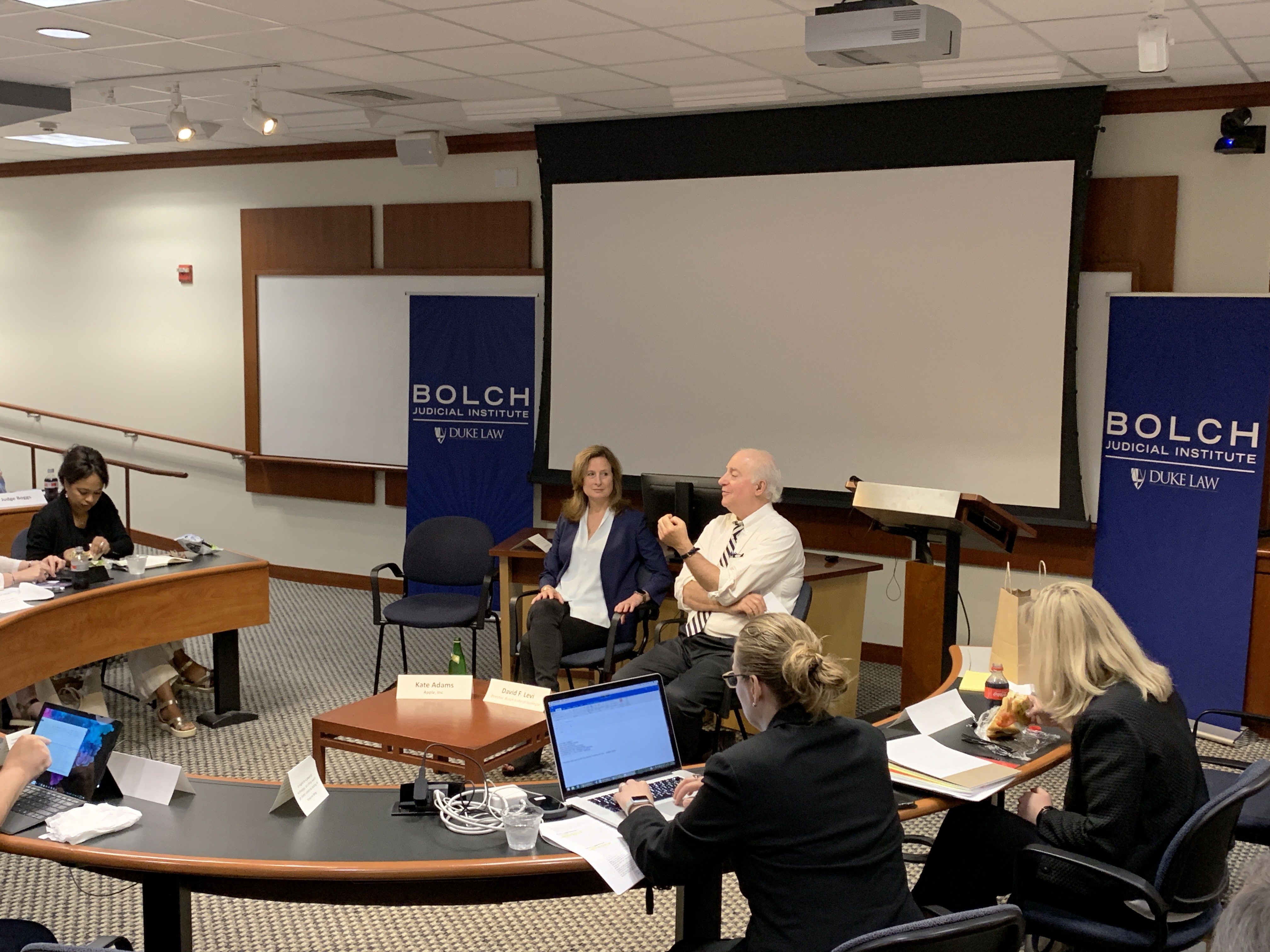 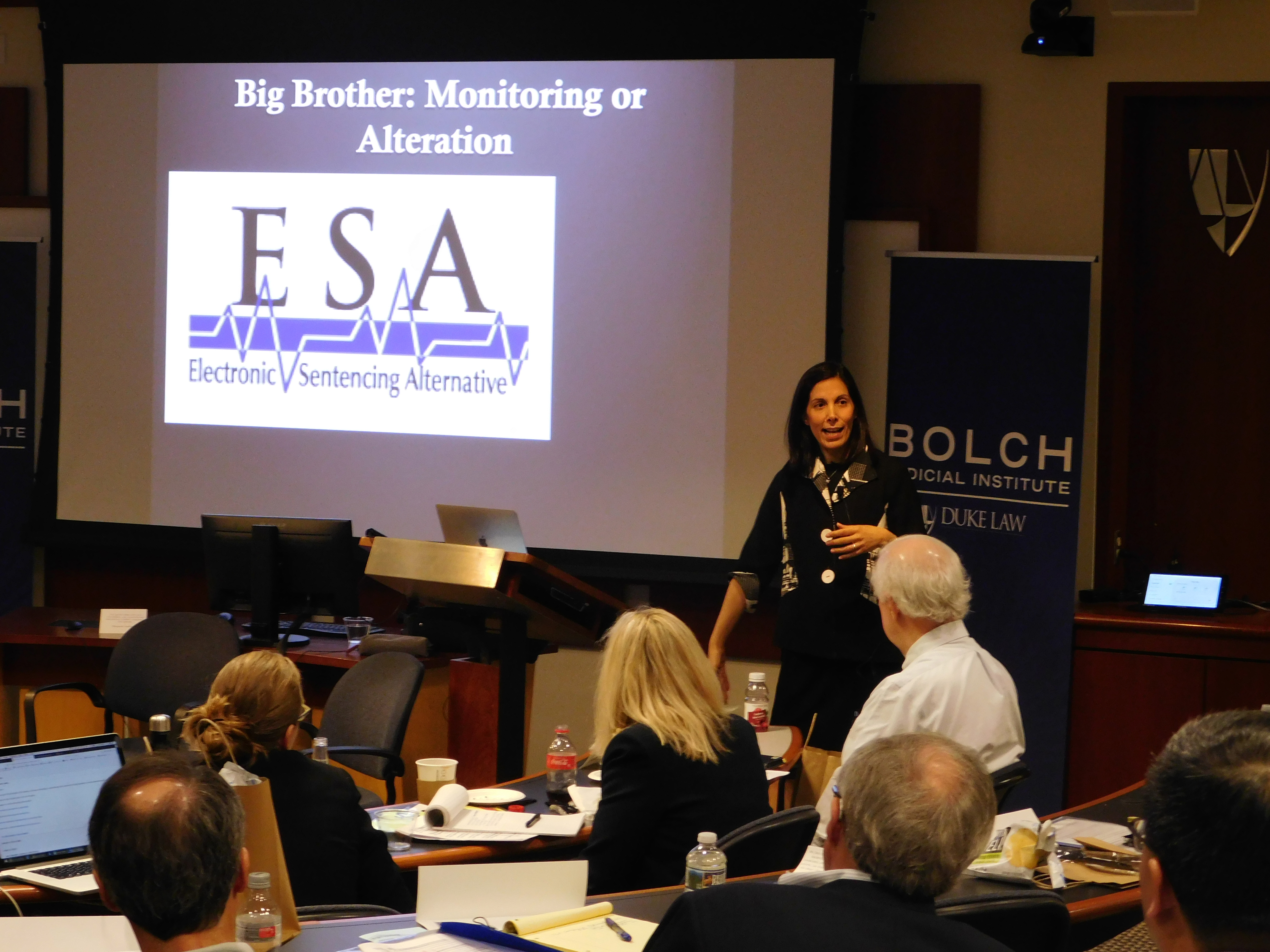 Duke Law faculty were well represented. Arti Rai, the Elvin R. Latty Professor of Law at Duke, participated in a presentation on artificial intelligence and regulation that aimed to examine regulatory responses to AI and what the future might bring. Shane Stansbury, the Robinson Everett Distinguished Fellow in Law, Ethics and National Security and a former federal prosecutor for the Southern District of New York, sat on a panel focused on cyber security, what cyber threats look like, and the national security risks and hazards that are fueled and facilitated by technology. Chris Schroeder, the Charles S. Murphy Professor of Law and Public Policy Studies at Duke Law, presented on legal concerns relating to data privacy, including challenges associated with data collection, analysis, and dissemination. Professor of Law and Philosophy Nita Farahany discussed cognitive liberty, or the right to the privacy of one’s own thoughts, and technological advances that might challenge that right. David Hoffman, a lecturing fellow at Duke, discussed the corporate approach to data privacy, while Brandon Garrett, the L. Neil Williams, Jr., Professor of Law at Duke, discussed technology and the Fourth Amendment and the use of risk assessments in judicial determinations. Lee Reiners, executive director of Duke’s Global Financial Markets Center, presented an introduction to blockchain, and Sarah Bloom Raskin, the Rubenstein Fellow at Duke Law, presented on fintech.

Professor Shane Stansbury said he was eager to participate in the event, and he hoped his introductory session would give judges a framework for thinking about security threats and new technologies. “We are at a critically important juncture as we determine how we want to write the rules in a world experiencing rapid technological change,” he said. “Judges are at the center of that discussion.”

For many of the judicial participants, the presentations were both illuminating and highly practical.

“Our first, second, and third priorities in the federal judiciary are security, security, security,” said Third Circuit Court of Appeals Judge Thomas M. Hardiman. “So, I was pleasantly surprised when I came to the table and saw ‘security is always excessive until it’s not enough.’ That really is our mantra.”