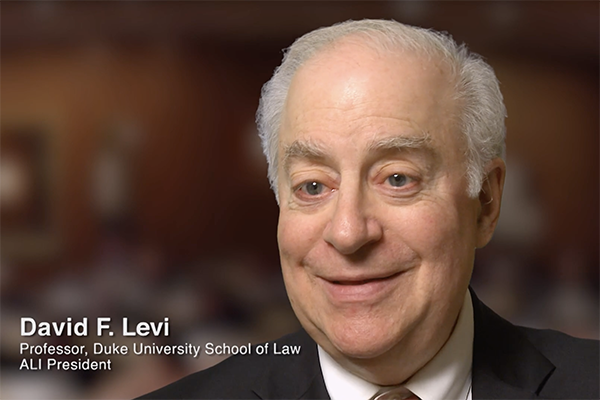 The American Law Institute (ALI) was selected and profiled for Visionaries, a documentary series that highlights the stories of nonprofit organizations working to make a positive difference in their communities and around the world. David F. Levi, president of the ALI and director of the Bolch Judicial Institute, describes the ALI’s unique ability to evaluate civil society and effect change through members’ discussions of issues that “affect everybody’s lives in very deep and profound ways.”

The documentary is hosted by Sam Waterston, a starring actor in the hit T.V. series Law & Order. Waterston explains how democracy is built on the principle of consensus and an understanding of truth that evolves over time, and the documentary highlights the ALI’s role in maintaining this principle.

“The American Law Institute is an example of what distinguishes a healthy democracy from an authoritarian state,” he says. “In a free society, the rule of law is arrived at by a deliberative process in which all participants are in a common quest for the truth.”

The documentary will air on PBS stations in the U.S. this coming fall.