Justice Mark A. Davis LLM’18 started a thesis and ended up with a book

The U.S. Supreme Court under Chief Justice Earl Warren is deservedly famous for making its mark in an era of high-profile cases. The Exum Court of North Carolina is decidedly less famous — but had a similar impact, according to a new book by North Carolina Supreme Court Justice Mark A. Davis. 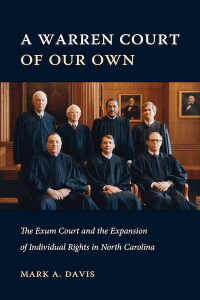 During a recent visit to Duke Law to present his book to students and faculty, Davis sat down with Judicature to discuss the book, which began as his graduate thesis for the LLM program.

“When I think back on the LLM program,” he says, “it’s the professors I keep coming back to — they were just so, so good. Every time I have a case that falls within the subject matter of one of the classes, I do tend to think back, ‘Gee, I wonder what professor so-and-so would think about this.’”

Davis had served on North Carolina Court of Appeals for four years when he arrived at Duke as an LLM student. He noticed during his time on the bench that attorneys practicing before him often cited to cases that had been decided between the years 1986 and 1995, and he wondered what was significant about this particular period. Davis says he began the project in the traditional way: “You start with your hypothesis, and see if your evidence backs it up.” But it quickly became something bigger than he anticipated. He set out to examine eight cases that he knew were “jurisprudentially significant,” but wanted to make sure they weren’t outliers. Ultimately he read and analyzed 65 cases and conducted 45 interviews. “When I got to 150 pages,” he says, “I thought, ‘this may be a little bit more than a thesis.’”

Davis found that under Chief Justice Exum, the North Carolina Supreme Court consistently expanded civil rights, took a new approach to criminal justice, and increased available remedies in tort law. That judicial approach — along with the court’s big judicial personalities and spirited philosophical debates showcased in opinions — created in the Exum Court a certain “judicial boldness,” Davis posits, that responded to and shaped the time and community in the same way the Warren Court did.

Indeed, when Davis describes Exum, one might think he is expounding upon Warren: Exum was someone who “thought about the law in very bold, abstract terms. He felt very strongly that the Supreme Court was a co-ordinate branch of government, which of course it is, and he thought that it was sometimes inevitable that judges would in fact make law and that sometimes it was necessary for judges to fill in the gaps, in particular where the legislature had not spoken on a specific issue. He had no qualms about that at all.”

But Davis’s book does not limit itself to that comparison. It also offers a detailed and holistic view of North Carolina state politics in a turbulent time — in which the court bore witness to one of the first examples of negative judicial campaigning in the country,  experienced growing pains as North Carolina inched toward becoming a two-party state in judicial elections for the first time in almost a century, and, against this backdrop, came to symbolize the importance of judicial independence in an elected judiciary. As Davis describes, no one on the court exemplified the value of judicial independence more than Exum himself.

For instance, after the governor declined to follow the longstanding tradition of appointing the senior associate justice to the position of chief justice — which would have been Exum — Exum resigned his seat in order to run against the judge the governor had installed. “He didn’t think it was seemly for two sitting justices to run against each other,” Davis explains. The choice struck a chord with Davis, who must stand election to retain his seat. “To give that up when you don’t have to, because of principles,” he says, “is just an incredibly courageous thing to do.” Exum ultimately won, and assumed the chief justice seat.

Davis also highlights Exum’s concurring opinion imposing the death penalty in State v. Woodson:[1] True to his character, Exum expresses “anguish at being such an opponent of the death penalty morally and religiously, but at the same time [he] recognizes that he took an oath to follow the law, even if he doesn’t always like the law.” Exum’s forceful opinion is full of memorable lines, such as his insistence that “[t]he argument that we somehow exalt human life by executing those wretches who murder and rape falls of its own weight.”[2]

The public took notice. Just after he stepped down from the bench, a local paper declared that Exum had become “known for, among other things, his ability to uphold a death sentence despite personal objections to capital punishment. And though he himself was consistently successful at the polls, he took a very visible role in urging the state to change from electing to appointing judges.”[3]

The Exum Court’s jurisprudence was bigger than a single personality, however striking it may have been; it was only with a majority of the justices that any true legal development could take place. And it did: For example, the North Carolina Supreme Court during this period ended what Davis calls a “long and virtually unbroken” line of cases declining to overturn a trial judge’s determination of whether evidence was so unfairly prejudicial that it ought to be excluded. In State v. Hennis,[4] a trial judge had allowed numerous graphic photographs of the victim to be shown to the jury. The appeal reached the high court. It was a gruesome case, and the court was expected to simply defer to the trial court’s judgment and affirm. “That’s not how the Exum Court operated,” Davis says. The court found that the photographs were prejudicial and had rendered the trial fundamentally unfair. It reversed and granted a new trial.

In another case, State v. Carter,[5] the court was presented with the opportunity to recognize a good faith exception to the exclusionary rule — or the principle that evidence resulting from an unconstitutional search need not be excluded from trial if police officers were acting in good faith in executing the warrant. The United States Supreme Court had recognized the exception two years prior in United States v. Leon.[6]  Once again, the path seemed obvious to many; court-watchers were ready to see the state supreme court fall in line, especially in an unsettling criminal case where reversing would mean giving the defendant a new trial.

“The stereotype would be ‘they are state court elected judges, they are not going to rule in favor of someone like this, they are going to do the politically favorable thing and refuse to overturn his death sentence — particularly when the U.S. Supreme Court has interpreted the Fourth Amendment in a way that gives them perfect cover to interpret their own constitution the same way and reach that result,’” Davis says. “But this court just didn’t do that. They said, ‘no, we are different from the federal courts, our search and seizure provision is different than the Fourth Amendment, and we’re going to interpret it the way we think is correct, and we don’t believe that a good faith exception is applicable.” To Davis, the case is “emblematic of how this court operated. They really didn’t care whether their decisions were popular or unpopular.”

The Exum Court ended in 1995, but Davis says its legacy is still relevant — not just in terms of legal precedent but also for what judges can learn from Exum’s approach to the work of judging. For the newly appointed North Carolina Supreme Court Justice Davis, Exum’s career reiterates “how crucially important it is for us as judges to build walls around what we do and make sure that politics doesn’t affect us at all.”