Coping with Covid: How the Courts are Preserving Access to Justice 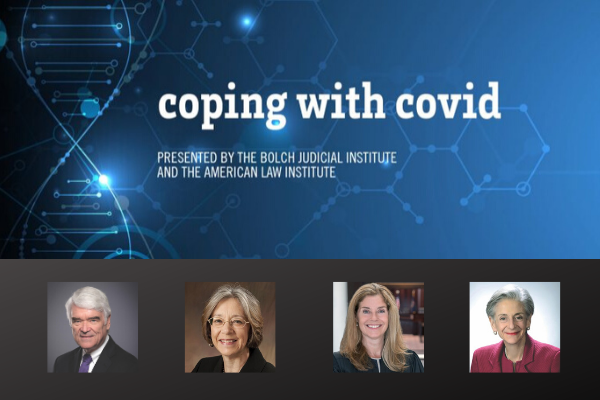 State and federal judges are moving quickly to address the unique challenges of ensuring that the courts remain operational during the COVID-19 pandemic, according to a panel of judicial leaders convened by the Bolch Judicial Institute and The American Law Institute. But challenges abound, and the long-term impact on the courts could be significant.

On a video conference call, David F. Levi, director of the Bolch Judicial Institute and president of ALI, led a discussion on “How the Courts are Preserving Access to Justice.” The panelists were:

Their discussion is the first episode in the Bolch-ALI roundtable series Coping With Covid, now available on video (via the Bolch Judicial Institute) and by podcast (via The American Law Institute).

See the video    Hear the podcast

“We decided to do this series on the effects of the Coronavirus on the legal system because ALI members and friends of the Bolch Institute care deeply about the justice system and the rule of law and want to know how and if some of the most vulnerable parts of the system are able to operate,” Levi said. “All of us are adjusting. But for some of us these adjustments are profound and likely to point in new directions for the delivery of legal services, judging, and the practice of law.”

The judges discussed the steps their courts have taken to change the way court business is done, including finding and disseminating equipment to allow judges and staff to work remotely, training thousands of judges to use video conferencing software for hearings, and issuing emergency orders to override rules requiring in-person appearances.

“Probably the most pervading thing we’ve done is video conferencing,” said Chief Justice Hecht during the discussion. “It’s just changing the operation of Texas courts profoundly. I imagine three weeks ago no Texas court had had more than one or two video conference hearings ever. As of last Friday, we’ve had 2,000, involving more than 14,000 people. I think, long term, this will change the way we do business at the courthouse and practice law and lots of other things.”

“Until a couple weeks ago, there were some judges who hadn’t done (video conferences) at all, and certainly nobody had live-streamed them so the public and the media could participate, which now we’re doing,” said Chief Justice McCormack during the discussion. “We have quickly ramped up. We issued an emergency order basically doing away with any rule that gets in the way of a judge doing a hearing remotely from his or her home or somewhere else. I feel like this is not necessarily the disruption we wanted, but I think it’s the disruption we needed. We’re also trying to gather best practices, to figure out everything we’re learning now so we can make sure we leave with the best of it. There is a little bit of lemonade here.”

Judges also discussed how the courts will address a backlog of cases when lockdowns ease; expectations for an influx of cases relating to the pandemic and its economic fallout; how the crisis is affecting jury trials; challenges for pro se litigants and others who may not have access to technology or help for filing necessary documents; and the pandemic’s emotional toll on court personnel and the public at large.

Levi noted that judges, court personnel, lawyers, and law enforcement officials have been “working so hard to ensure the continuity and accessibility of our courts during this unprecedented crisis. I think we all know that the health workers are the ones who are most exposed, but our court personnel and our judges are also doing heroic duty during this time.”

Questions about this episode or the Coping with Covid series may be directed to Melinda Vaughn at the Bolch Judicial Institute (Melinda.vaughn@law.duke.edu) or Jennifer Morinigo at The American Law Institute (jmorinigo@ali.org).

See the video    Hear the podcast