Coping with COVID: Legal Services Organizations on the Front Lines 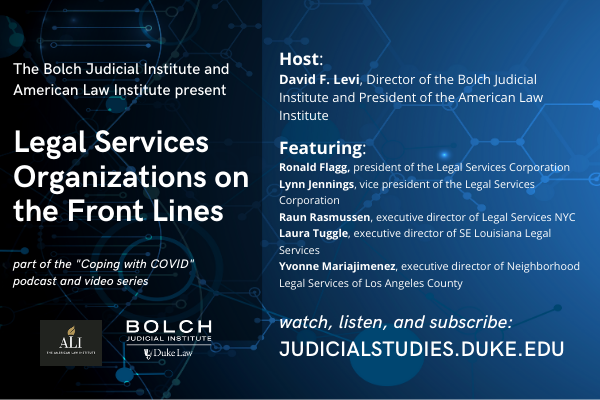 Legal aid agencies are being hit by a “triple whammy” as they work to continue to serve the legal needs of poor and underserved communities, according to the administrators of legal services agencies in some of the country’s largest and hardest hit cities.

In the second episode of Coping with COVID — a video and podcast series jointly produced by the Bolch Judicial Institute and the American Law Institute and hosted by David F. Levi — legal aid leaders discussed the daunting challenges of continuing their services during the COVID-19 pandemic, which has dramatically exacerbated the already significant legal needs of their clients; created budget shortfalls nationwide that are already reducing funding for legal services at a time when needs are higher than ever; and forced legal aid staff to work remotely with clients who often lack the technology needed to facilitate remote meetings.

Watch the Video      Listen to the Podcast

“So we know that having gone through 10 presidentially declared disasters in Louisiana in the past 15 years — the 2008 economic crisis, the BP oil spill — all of the economic challenges and disasters are really coming together in this one, which we know is going to be our program’s biggest civil legal aid crisis in our 50-plus year history, and very likely that will play out on the national level,” said Laura Tuggle, executive director of Southeast Louisiana Legal Services, an agency that primarily serves New Orleans. “We’ve been really facing a lot of challenges, with illegal evictions, unemployment spikes, and we’re using a lot of new strategies to figure out how to reach our client base.”

Tuggle also discussed her agency’s efforts to spread the word about their services, noting that usually the majority of their clients come into legal aid offices from off the street. Now, the agency is using Facebook, media coverage, and connections with churches and other community organizations to share information. She shared the story of one client who called from her hospital bed after seeing a phone number for legal services on television. Her husband had died from COVID, she was in the hospital being treated for COVID, and she’d learned her landlord was evicting her.

“Here she is trying to fight off this illness which just destroyed her life and livelihood and she’s having to worry about being put out when there’s a legal order from the governor saying no evictions,” Tuggle said. “It really makes you mad. At the same time, it makes you really sad, but it’s also good to know that we were able to help her and resolve the situation but that she might not otherwise have found us if we weren’t pushing out, through media, more than we typically do.”

Raun Rasmussen, executive director of Legal Services NYC, noted his agency is particularly struggling to appropriately support staff who have had to devise entirely new ways of working while handling child care and sometimes illness at home. Deploying laptops, training staff, and finding ways to provide emotional support to a dispersed team have been key. Another priority, he said, is finding new financial supports as traditional sources of funding dry up. “Stabilizing our organization going forward from a both overall funding and a cash flow standpoint, and making sure that our staff are supported so that they can continue to provide great services for our clients is what we’re trying to manage,” he said.

Many legal aid agencies receive financial support from Interest on Lawyers Trust Accounts (IOLTA) funds, which pool the interest earned on lawyers’ trust accounts to provide funding for civil legal aid. In an economic downturn, those critical funds diminish considerably. The CARES Act, passed by Congress in late March, provided $50 million in emergency funding for legal aid services, but Ronald Flagg, president of the Legal Services Corporation, said it fell far short of the $100 million his organization had advocated for.

“Just in New York state and New York City, a $30 million reduction in IOLTA, 10s of millions of dollars reduction in housing funding in New York City, this puts in perspective how far our $50 million emergency funding across the entire country, across 122 grantees can go,” he said. “So when people say, ‘Well $50 million is a lot, that should take care of it.’ No, it’s at best a good first step, but it’s nowhere near enough to take care of it, and we’re back at Congress right now seeking more funds.”

Lynn Jennings, who oversees LSC grants and is managing the distribution of CARES Act funds, said LSC staff are working to deliver aid to agencies as quickly as possible. “Our goal is to get them as much money as we possibly can, be as flexible as we can in terms of oversight, and provide enough technical assistance for them to exchange information and learn from each other,” she said, adding that agencies can visit LSC.gov to access grant applications and other resources. “We’re here to serve [the agencies], because they are doing a phenomenal job.”

Yvonne Mariajimenez, executive director of Neighborhood Legal Services of Los Angeles County, said the sheer size and scope of her agency’s services made the transition to remote services difficult, but that partnerships with other community organizations have helped. “We are collaborating with community-based organizations, faith institutions, schools, teaching people how to use Zoom in English and Spanish and Chinese and all the 12 threshold languages that we speak here in L.A. County,” she said. Community partners are helping to identify people with immediate needs and get them into the “funnel” for legal services. “We had a huge demand for our services, and now with the fact that we can’t see people in great numbers in person, it’s a funnel. It’s trying to get people into the portals that we have set up, but they [don’t have] the access that we once had for people.”

Questions about this episode or the Coping with Covid series may be directed to Melinda Vaughn at the Bolch Judicial Institute (Melinda.vaughn@law.duke.edu) or Jennifer Morinigo at The American Law Institute (jmorinigo@ali.org).