What’s next for the U.S. presidency? New Bolch video series launches with analysis of Trump’s legacy 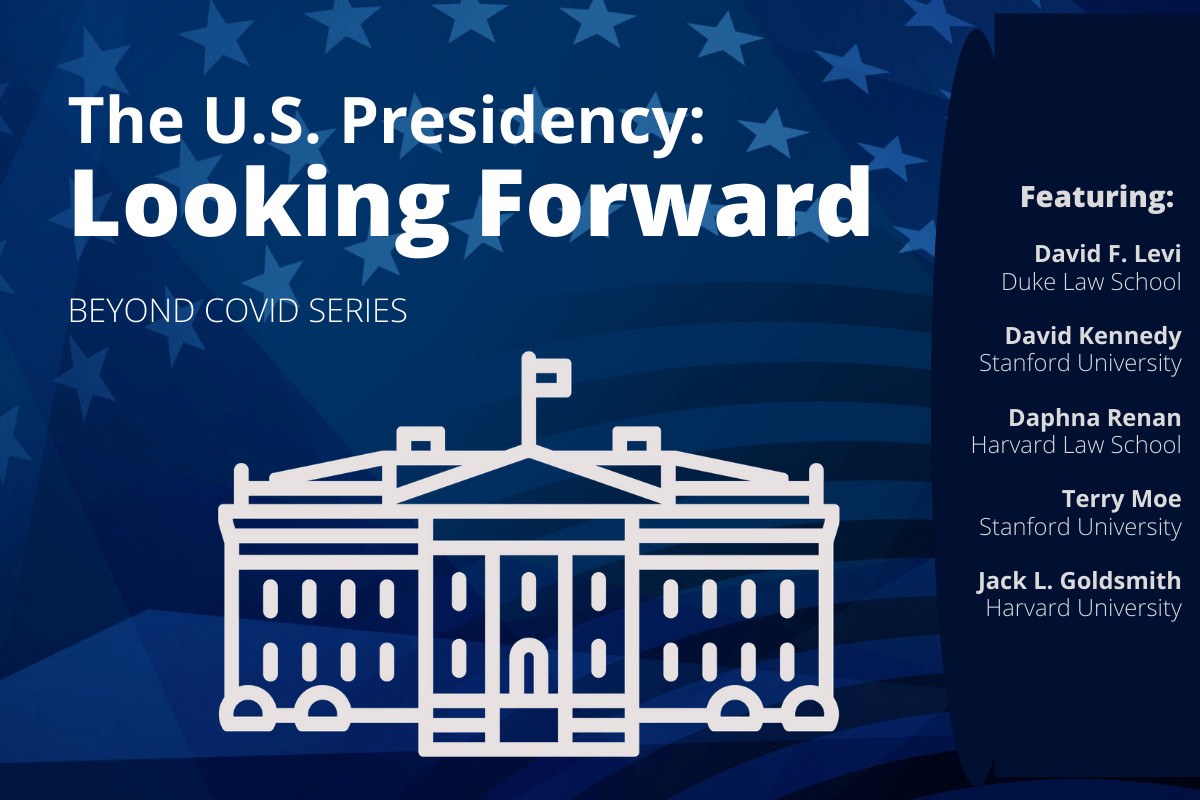 The first episode of Beyond Covid, a new video series co-produced by the Bolch Judicial Institute and The American Law Institute (ALI), explores the legacy of the Trump presidency and the future of the American presidency in the aftermath of a violent attempt to disrupt Congress’s certification of the 2020 presidential election at the U.S. Capitol.

Noting that the election was both divisive and difficult due to logistical challenges presented by the COVID-19 pandemic, Levi opens the program by asking whether Trump is a unique figure in history — a cause or a symptom of deep political division and unrest. “What will be the legacy of this presidency and this belligerent president?” Levi asks. “Was the Trump presidency uniquely threatening to Democratic values and institutions because of this president’s unusual personality and ideology? Or are there other external forces or circumstances at work that might suggest a repeat of this dangerous experience in the future?”

Panelists suggest the rise of populism, racial tension, and distrust in institutions and media are just some of the challenges that will outlast the Trump administration. They also discuss the role of the Internet and social media in fomenting increasingly divisive political discourse; the challenges faced by both major political parties in charting their future in a post-Trump era; and whether strong leadership within the states may be a counter to ineffective federal government.

Historian David Kennedy highlights the Founding Fathers’ debates over how much power the executive branch should have and the evolution of the role of president. It has always been a unique, and uniquely controversial, position, he says. “The president is the one officer in our system with national responsibilities, by definition,” he says. “All the other elected officials in Washington, D.C. — there are 435 in the House, 100 in the Senate — are elected by local constituencies and have local responsibilities and obligations. But the presidency is the institutional place where responsibility for the country as a whole, the nation as a whole, is invested. Precisely for that reason, the institution of the presidency from the moment of its conception in the Philadelphia Constitutional Convention of 1787 has been controversial.”

The presidency is further complicated by the inherent tension between an individual president’s personality and personal ambitions and the formal role and responsibility of the Office of the President, adds legal scholar Daphna Renan. “Ever since the framers debated term limits and presidential impeachment, the disagreement has been over how we institutionalize a space for personal judgment, for charismatic leadership, while resisting self-dealing, or the use of public office for private ends. Trump’s insistence, over and over again in his actions and his rhetoric, that this is a distinction without a difference, flies in the face of constitutional and political development over the centuries,” Renan says.

Terry Moe, a political science scholar, says Trump rode a wave of populism to the presidency, and that while his personal traits created significant challenges for the country’s norms and systems, that movement will not go away when his presidency ends. He calls for political reform to address the inability of government to meaningfully address the real problems that gave rise to populism.

“The solution lies in having a government that can do a more effective job of meeting the needs and concerns of its people, but especially those people who are the most alienated. We need to win those people back,” Moe says. “One way to pursue that is through new programs for immigration reform, for job training, healthcare, childcare, infrastructure, investment in rural communities and so on. All of these things can help to diffuse some measure of the populist anger and win some people back, but more fundamentally, we need institutional reforms that will give our government a greater capacity for effective performance.”

Legal scholar Jack Goldsmith discusses reforms that should be made to strengthen the presidency against the flaws and failings of future presidents. “I think it’s important to be clear on the type of challenges Trump presented to presidential accountability and the rule of law,” Goldsmith says. “What Trump did in terms of his characteristic abuses were abuses of lawful power that violated norms, by which I mean non-legal constraints on the presidency. In other words, not by law, not in terms of legal restrictions, but by non-legal restrictions that work through informal social sanctions. Trump just ran through these.

“He’s really called into stark relief just how much norms and assumptions about the general reasonableness of a president, were kind of assumptions for the system we had in place,” Goldsmith adds.

Watch the full video here, or listen to the podcast on ali.org. The program is the first in a new video series, jointly produced by the Bolch Judicial Institute and ALI, that examines how our legal system and political and social institutions are evolving in a post-pandemic world. The Bolch Judicial Institute and the ALI also coproduced Coping with Covid, a 2020 video and podcast series that examined the impact of the pandemic on courts and the legal system.